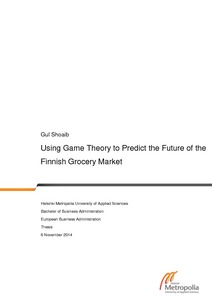 This thesis researched how game theory can be used to determine the potential future direction of the Finnish retail grocery market. In order to do so an intensive literature review was conducted in order to understand the theory and develop necessary skills for its application. In addition the Finnish grocery market was reviewed thoroughly to identify patterns of behaviour and strategic directions of the main companies.

Three main companies were identified, S Group, Kesko and Lidl, which have been in fierce rivalry in the market. S Groups position was perceived to be strong, while Lidl’s aspirations of growth were conceived. The effect of the slow economic growth period changing customers’ attitudes, together with the tightening competition in the retail market, is expected to bring changes in the near future.

Following the market review process the situation was depicted as a game and analysed using different approaches within game theory. The analysis showed that of the three main players, Lidl is expected to gain market share over the others, S Group and Kesko. However this was dependent on whether a favourable decision as to building regulations was made for the company. Changes in market share were seen as being more subtle should the new regulations not be adopted.

Concluding it was perceived that game theory is an extensive and highly exploitable field to use in situations where strategies are assessed against those of others,’ as such an approach helps evaluate the overall competitiveness of a company’s strategy.