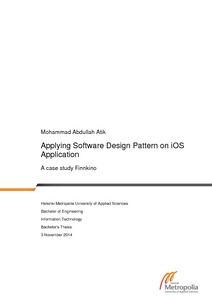 Software developers practice software design patterns and principles to solve commonly occurring problems while ensuring extensible robust and maintainable system. The thesis aimed to study a subset of software patterns and principles. The practical goal of the thesis was to develop an iOS application with proper patterns applied. The main focus was to recognize which pattern would suit for an application’s various design challenges and what benefits would be harnessed by it.

The study aimed to answer two questions: how a pattern needed to solve the problem was recognized and what were the consequences of applying the pattern. An action research method was followed for this project. It involved design, analysis and implementation phase for developing the application.

Xcode IDE was used as the development environment to implement the practical task. Application usability testing and profiling were done with Instrument tools which are part of the IDE. Debugging and compiling were done with Apple’s new tool LLVM (Low Level Virtual Machine).

The result of the practical task is an iOS application named Finnkino which allows searching and viewing movie information in nearby theaters within Finland. In addition it also shows current, upcoming and top movies around the globe. The application lets the user bookmark a movie for later view. A movie trailer editing and saving feature is also available.

Based on the final result, it can be concluded that software design patterns help to recognize the applicability of design principles to software development. Thereby applying design patterns produces robust, long lasting and maintainable software.