Usability Study and Improvement of The Äly Excel 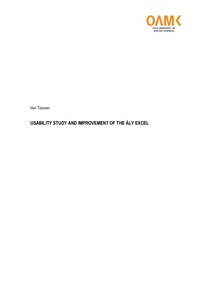 This Master’s thesis concentrates on a particular tool, called Äly Excel, which is used in health care centres in Finland. The Äly Excel is a Microsoft Excel based tool that helps to plan a health care personnel rota. The main goal of this work was to enhance usability of the Äly Excel. The development work was part of the Hyvä Potku project that is managed by Northern Ostrobothnia Hospital District.

To find out the most important usability problems of the Äly Excel, usability tests were carried out in an early phase of the project work. Also, a questionnaire was sent out to gather user experience and possible suggestions for improvements. Once the feedback and user test observations were analysed and agreed with the Hyvä Potku project members, the development of the Äly Excel began. Since the Äly Excel is a Microsoft Excel based worksheet, it was natural to choose Visual Basic as a programming language as Visual Basic Application is part of the Microsoft Office package. New UI features are designed so that they follow well-known usability studies.

In this thesis a usability theory is observed and discussed. The thesis details the software and UI design and why certain decisions were made. The problems faced during the development work are explained. At the end there is a discussion about the future development of the Äly Excel.