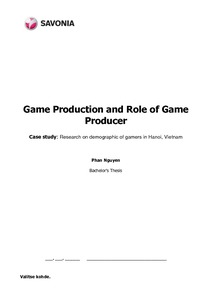 This thesis was intended to serve as a guideline on how to manage a video game development process as a producer. The study includes basic knowledge of game production process, focusing more on managing the project as a whole, rather than reaching specific technical aspects. The production methodology described here is a combination of several methods used by most studios in the game industry.

Additionally, understanding of game producer’s roles and characteristics was also studied to give author a “mental map” to apply in future career. The goal was to accomplish the most efficient and inspired production process as possible which could be utilized in most cases.

Finally, the demographic of gamers in Hanoi – capital of Vietnam – was studied and analyzed, for the purpose of drawing a conclusion on whether Hanoi would be a potential environment for new startup game development studio in the future. The investigation method carried out was quanti-tative research; data was collected from online questionnaire and physical handouts.