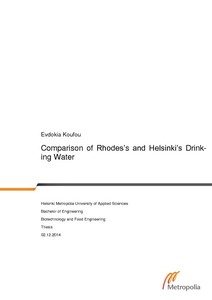 The quality and features of water mainly depend on the geographical location even though significant differences can be noticed in each country’s water. The most influencing causes of these differences are climate, water treatment installation technology, and last but not least, the water source. Also, it is widely known that water in the northern countries contains less minerals and salts than water in the southern countries, whose concentration of minerals and salts is higher. This contradiction is clearly caused by the climate difference as it has been observed that in southern countries, the human organism loses large proportions of salts and minerals, while in northern countries, the case is the opposite; hence, these elements have to be regained through water.

The aim of this study was to analyze and compare two different water samples from Rhodes, Greece and Helsinki, Finland by determining various parameters, and thereafter, to discover the impact of the sample’s matrix on the nitrogen pollution through the determination of ammonium by using a standard addition method.

Eight basic parameters were analyzed, such as pH, hardness, conductivity, anions (F-, Cl-, Br-, NO3-, SO42-), cations (Na+, K+, Ca2+, Mg2+), total dissolved solids (TDS), carbonates and bicarbonates. Each measurement was repeated eight times.
For the determination of ammonium, six solutions were made for each water sample, which were considered as standard solutions. The concentrations were: 0.15 mg/l, 0.5 mg/l, 1 mg/l, 1.5 mg/l, 2 mg/l and 2.5 mg/l.