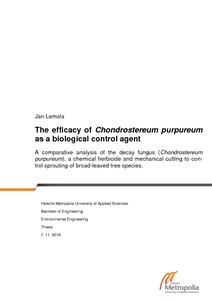 In forestry, manual control of broad-leaved trees is tedious and costly. To reduce costs, chemicals have been applied to keep these species in control. However, some chemicals are not recommended to use because of possibly adverse effects on the environment. Instead of chemicals, biological alternatives, such as a fungus, Chondrostereum purpureum, might be used to prevent sprouting. C. purpureum is a common decay fungus in Finland; it has been investigated at Metla, to find out whether it could be used as a biological control agent against sprouting of broad-leaved tree species.

This thesis project is related to the Metla research project. The aim of the thesis project is to investigate, how efficiently C. purpureum prevents sprouting of broad-leaved tree species such as birch, aspen, rowan and willow when compared to chemical treatment and mechanical cutting only, and whether C. purpureum is able to penetrate into the roots of these broad-leaved trees.

In the field, freshly cut weed trees were inoculated with C. purpureum or Biomax (a glyphosate containing herbicide), to compare their efficacy to the traditional way of sprout control i.e., mechanical cutting. Altogether 483 saplings (birch, aspen, rowan and willow) were treated in southern Finland. After three months, the mortality, the number and height of stumps sprouts of the saplings were investigated, and 124 saplings were excavated for further analysis in the laboratory. The occurrence of C. purpureum was investigated in wooden samples taken from inoculated stumps and connected roots. The data was analyzed using generalized linear mixed models.

After three months, the mortality in fungus treatment was exceptionally high within birch saplings, and did not differ significantly from that of herbicide treatment. However, significant effects caused by herbicide treatment were observed on all tree species. The fungus, C. purpureum, was successfully isolated from root samples of birch stumps. On the basis of the results of earlier research, three months is not a long enough exposure time for C. purpureum to fully unfold its biological control potential.