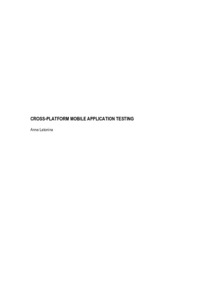 This bachelor thesis describes multi platform mobile application testing process. Marmalade Software Development Kit was used as a primer environment for development and testing process.
The thesis is divided into three major parts. The first describes development environment and target platforms. The second part introduces testing basics. The third part describes actual process of testing of the application. Arcade type game Glow Hockey 3D was a part of research part. This application was tested from the beginning of the development process and is still monitored.
The application was successfully released on Google Play market and received mostly positive reviews from the critics. Post release problems appeared, however, their number was not great. As a result, multiplatform testing and development saved a lot of time and money since there was no need to double the application on another platform with different environment.