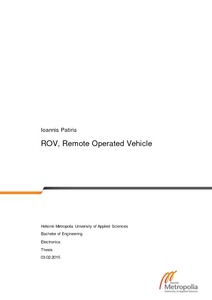 The purpose of this thesis is to show the basic principles of a Remote Operated Vehicle. The aim is also to document in detail how a small scale remote operated vehicle is constructed from the start.

The result of the project was better than expected. There were not many unexpected problems during the construction of the small scale Remote Operated Vehicle and the test drives showed that the underwater vehicle works as planned. However, there is still room for further improvements, such as adding manipulators and increasing the working depth of the underwater vehicle