Software piracy: A study of causes, effects and preventive measures 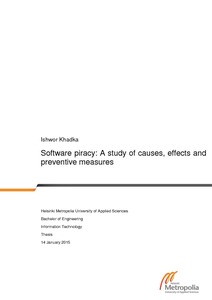 Software piracy is a serious issue that has been affecting software companies for decades. According to Business Software Alliance (BSA), the global software piracy rate in 2013 was 43 percent and the commercial value of unlicensed software installations was $62.7 billion, which resulted in millions of revenues and jobs lost in software companies. The goal of this study was to better understand the software piracy behaviours, how it happens, how it affects to individuals and software companies, security issues associated with using pirated software and possible preventive measures that can be considered to reduce piracy.

The study utilized quantitative research method to collect data from students. For this purpose, an online survey was conducted among 46 undergraduate students studying at Helsinki Metropolia University of Applied Sciences and Laurea University of Applied Sciences using Google Form and asked several questions concerning software piracy. Students were provided a link to the form via Facebook messages and emails to participate in the survey. Importantly, most of the respondents responded that high software prices, pirated software being available on the Internet and economically weak people not being able to afford software were the major reasons behind the increasing software piracy.

The study provides an overview of software piracy and creates awareness against unauthorized use and distribution of software. Moreover, it is a huge and interesting topic for further studies.