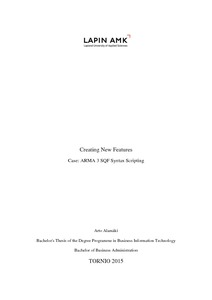 Currently, the game ARMA 3 is lacking in features in some areas and to battle this, community members have created scripts to solve these problems. One of these problems is the lack of Active Protection System on tanks, which can be found in their real life counterparts. The script which tried to improve this situation, was the Bakerman Armour Improvement System. However, even this script is lacking in some basic features. This thesis seeks to extend the Bakerman Armour Improvement System script to its full potential by adding these missing features.

Similarities and discrepancies between the Armour Improvement System and the real life Active Protection System, in which the Armour Improvement System is based on, are examined in order to find a set of missing features. After finding a set of features, the SQF syntax scripting language, which is proprietary to ARMA 3, would be used to create these features. Furthermore, online publications regarding testing methods, user interface design, Active Protection System and game balance were used. Additionally, guides, forum posts and wiki pages created by ARMA 3 community members were also used. Constructive research method was used as the problem is practical and the solution for the problem would be practical as well.

During the feature design phase, it was found out that simply taking the features as they are in the real life Active Protection System and adding them to Armour Improvement System would possibly cause some balance issues in the game. To remedy this, some features were modified to have exploitable weaknesses to improve game balance. However, even these modifications remain uncertain as further testing would have to be conducted. Furthermore, the final script could be used as it is in present form, but future refinement and development is suggested.