Development of cooling HVAC-type system based on thermoelectric effect 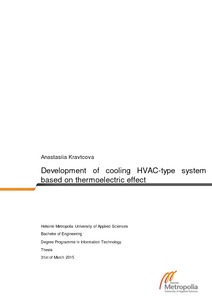 The project was carried out in a company with the purpose to develop a cooling HVAC-type system, based on thermoelectric technology into a special application. The project was completed over a period of half a year from August 2014 to January 2015, and will be developed later on. The major goals of the project were achieved, and further steps were figured out.
This project was implemented in several steps. Research of the proposed technology was the initial point. In the beginning, no clear solution was known, so the current market situation study was completed as well. On that basis the development of the final product was done. Evaluation of advantages and disadvantages, further improvements and aims finalized the project.
Thermoelectric effect was stated as the basic technology for the cooling system. The specific application was designed according to the purpose of integration the system into the company’s product. Two parts were included in the project. The first one was cooling the device physical prototype design. The second part was Arduino-based control system implementation. Those steps were successfully completed in accordance with the plan.
All in all, the project was completed successfully. The cooling system based on a thermoelectric principle prototype and its control system were implemented, and integrated into the company’s main product. However, obvious limitations of the system were analysed, and possible solution for improvements was offered.