The Power Of Oil : An Independent Scotland 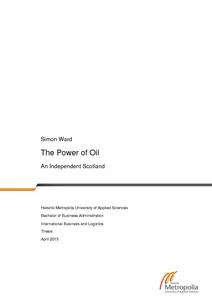 The objective of the thesis is to identify whether or not the price of oil is intrinsic to an independent Scotland's economic success. The research reveals that Scotland has a greater reliance on oil revenue than the remaining parts of the United Kingdom. The decrease in the price of oil over a longer period will have big impact on maturing oil fields in the North Sea, which will lead to the loss of jobs and the premature closure on oil fields. While the oil price is low, reducing taxes on the companies involved in the North Sea, is one way of safeguarding this industry. The oil in the North Sea is in decline, and basing any future on such a volatile substance is very dangerous. Over the long term, investment and exploration in the North Sea oil will decrease. Scotland is sheltered from the low prices of oil and declining oil production, through being part of the United Kingdom.

The outcome of the study was that if Scotland were to become independent from the United Kingdom, it would gain a vast share of the oil fields currently held by the United Kingdom, which will lead them to have an overwhelming majority of the oil revenue. This share can be used to negotiate on major issues with independence such as the currency and debt issue. With the currency issue, a currency union is the only option, which will provide a smooth transition to independence and the strongest possible financial security. In the short term, an increase in borrowing and decrease in public spending are very likely; however in the long term this is not sustainable for a newly independent country. Exports will need to be increased dramatically to cover the possible loss in revenue from oil. Supporting local businesses is very important in achieving this increase in exports. Attracting further responsible foreign direct investment is important. Scotland must set up an oil fund to safeguard against lost revenue from maturing oil fields and sudden drops in the oil price. An independent Scotland's finance sector needs to be restructured to withstand a financial crisis. The price of oil is not intrinsic to an independent Scotland's economic success if the above changes are made, but oil revenue is a very important asset to Scotland.