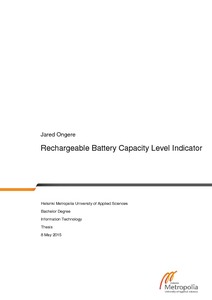 This project aimed at building a system that would indicate the capacity level of a Nickel Metal Hydride battery upon charging and discharging. The Nickel Metal Hydride battery was selected in this project due to its preference among consumers. However, since the principle behind the rechargeable battery technology is similar, the system can be used to test other types of batteries.

System implementation involved designing and building a battery charger circuit and a discharge circuit. Software design then followed, after which testing was performed.

The project goal was achieved and results were presented through numeric figures, charts and indicators. The system is expected to help in planning with batteries to avoid halt of devices during operation. The results gathered during testing point to a possible reduced battery wastage. A better way to handle batteries to conserve capacity has also been high-lighted.