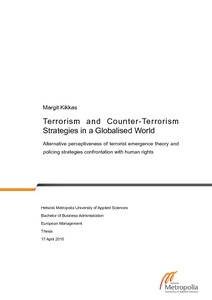 Globalisation and development in technology have advanced terrorism to reach a broader target audience. Especially focussing at the international co-operation strategies and combined social networks, terrorist activities have an direct- and indirect effect on private households, international commerce and local governments. Security institutions and state organisations use various combinations of counter- terrorism measures, that are mostly social-, political-, or financial in nature. Nevertheless it is argued that fighting terrorism goes into conflict with basic human rights and promotes national violence. As a consequence, this thesis is an attempt to investigate in more depth the impacts of terrorism and counter-terrorism strategies based on the fundamental extremists emergence theories.

The first chapter analyses main motivations and possible reasons behind terrorist activities with the regime types of targeted and source countries. The results from leader- and followers theory, radicalisation process and economic environment model of dictatorship were the cornerstones for the second chapter, that examines an spectrum of micro- and macro level impacts. The results revealed, that fragile politics and absent legal frameworks for national security promote economic downturn and terrorism. Thereby information asymmetry and countries individual risk-assessment should frame the basics of counter-terrorism matrix.