Behavior Design of Nao Humanoid Robot: a Case of Picking up the Ball and Throwing into the Box 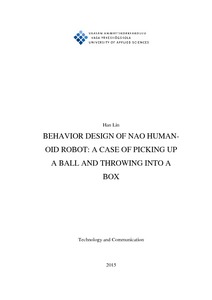 In this thesis, Hough circle transform is utilized to detect the center of the ball precisely in the view of the robot in the vision system. In addition, probability theory is applied in designing and optimizing the strategy of picking up the ball autonomously. More importantly, the strategies of tracking the ball dynamically and calculating the distance to the box are designed based on mathematical models. And key frames in timeline are used to design the animations. Therefore, the robot can achieve this project successfully.

This project was completed by using Python in Windows platform. And Eclipse was used as the environment for programming Python. Besides, OpenCV and Python were used to recognize the red ball. In addition, Choregraph was used to design the animations and Matlab was used to find the location of the box. The robot is the newest Nao robot which is version 5. In this thesis, the implementation method was mainly software engineering which involves planning, developing, debugging and testing.