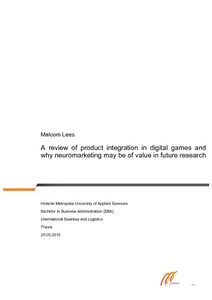 A qualitative method was applied. The study examined secondary data collected from sources that include: scholarly and peer reviewed publications, trade publications, popular publications such as magazines and newspapers, academic books and internet sites.

It was found that the primary benefit of product integrations in comparison to traditional advertisements is that the consumer perceives them as entertainment instead of an advertisement, meaning that the counter-argumentation that is expected from a consumer when viewing an advertisement is bypassed. It was also discovered that digital games compared to traditional media offered the opportunity of dynamic advertisements, meaning that advertising campaigns can be personalized and/or customized mid-campaign. The analysis revealed that implicit memory might be more important than explicit memory to the processing of embedded advertisements in games, but that most of the research conducted has measured explicit memory. Neuromarketing was identified as a concept that could be applied in future research of product integration in games because it measures unconscious (implicit) processes with the use of neuro-imaging and psychophysiological techniques.

It was concluded that digital games have massive potential as a channel for advertising because the games industry is growing exponentially. The principle conclusion was that in order for product integrations in digital games to be proved as effective promotional tools, more research is needed, especially into implicit memory. Neuromarketing was recommended because traditional research methods for measuring implicit memory are poor.