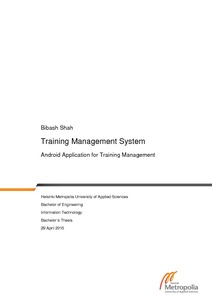 The goal of the project was to develop a tablet application to take attendance of trainees (employees of AREVA) in the IT security training. The application allows digital registration of trainees in an easier and safer way. The project was carried out for IT Security department of AREVA, the nuclear energy production company. They wanted an application in a tablet where they can use it instead of pen and paper.
The application was developed in the Android platform as it is an open source and very powerful operating system. The eclipse IDE was used for writing source codes in the Java programming language. Extensible Markup Language (XML) was used to define the basic components and the visual components in Android.
The project was carried out very rapidly keeping in the mind the deadlines and necessities. Incremental development method was used throughout the project because it is cyclic rather than unidirectional, offering a greater ability to incorporate changes into application during the development time. All the processes were completed such as software specification document, development and testing before the product was released.
Furthermore, the application was developed, debugged and tested in a real Android device named Nexus 7.0 first generation tablet. Finally, the application was demonstrated to the department. Overall, positive feedback was received as a result of evaluation. Future developers can use this project to learn more about building an Android application.