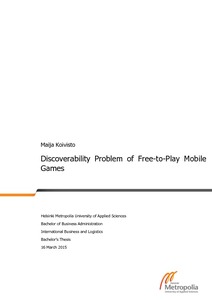 Gaining visibility is crucial to a mobile game’s success. The competitive forces in mobile games market are strong, which pose challenges for game discovery. Low barriers to entry, minimal capital requirements and equal access to distribution platforms are some of the reasons the market is now flooded with staggering amounts of invisible, undifferentiated mobile games desperate for downloads.

The thesis will give a holistic view of the current discovery landscape of free-to-play mobile games. The main purpose is to come up with possible solutions to the discoverability problem faced by free-to-play mobile game developers by identifying the most influential discovery channels used by the mobile gamers. Potential marketing methods are discussed not only in comparison to the literature but to findings emerging from the secondary data to determine the most viable use of marketing resources.

It became evident that app stores and word-of-mouth were the most influential sources for game discovery. Interestingly, the two most influential discovery sources remained virtually unchanged during the surveyed years. Advertising and promotions were not reported as highly influential discovery channels. A highly valuable segment of mobile gamers were identified as sharers and whales, which the developers should try to attract by building social features and virality mechanics inside their games.