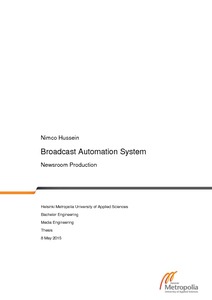 Broadcast automation is not new technology. It has been developing for years and has only recently evolved fast due to its importance in today’s economy. This thesis is designed to be a stepping stone for different aspects of news automation systems. The process starts from the journalist’s newsroom computer system and ends with the final production of transmitting the program. It is a study of how the system is now rather than a statement of what it should be in the future. However, future technological advances are already in development.

This thesis does not go through the technology behind the automation systems, because the technology contains a great deal of classified information due to growth in field of broadcast automation and the fierce competition between the industries. These methods that are demonstrated in this thesis are already in use. They are produced by major news programs on a daily basis. These broadcasting companies include Finnish and many other international broadcasting companies such as YLE, BBC, Aljazeera and many more.