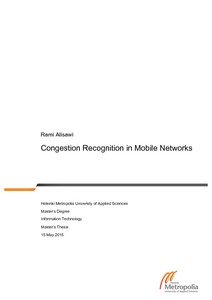 Smartphones have proven to be popular among people around the world, due to a long list of features and capabilities. Such great benefit will multiply once internet connectivity is available. Mobile phones operating systems are evolving quickly to meet end user expectations, furthermore, operating systems typically include a market or store where millions of mobile applications are available and can be easily installed. The growth of the number of applications, smartphone users and the number of applications installed by a single user is increasing the load on the mobile network, given that most of the applications require internet connectivity to function. The increased load can evolve into congestion that can be felt by users, for example, it will take longer time to load a web page.

The algorithm has proven to be novel and has led to a granted patent in the US. Further-more, the study concluded that real-time congestion detection can be extremely beneficial for mobile operators where they can get insights from the user prospective, in addition to the countless cases where application developers can alter their application connectivity logic according to congestion situations.

Additional research could be conducted using the algorithm and the implementation described in this study. For example, to build an application to compare radio access performance between operators in different areas, so end users can pick the operator with the best quality of service in their areas.