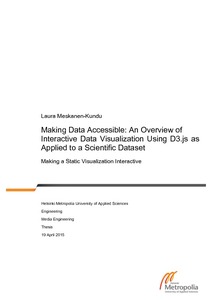 Technology is moving at a very fast pace, but data is still represented as tables, static graphs and infographics that do not create an impact on the population at large. Excluding the scientific and educational communities, to the common individual information should be displayed in an entertaining manner.

This project set out to fulfill this goal by using known technologies from D3js, design guidelines, CSS3 animations, and HTML5 elements to real scientific data from the United States National Climate Data Center. The final product is a one page web application displaying 3,000,000 years of global temperatures in a visual format. The data was plotted using D3js, made interactive with JavaScript and laid out using Twitter Bootstrap.

What can be concluded is that it is possible to create interactive content with current technologies, but the process is still only achievable after extensive study of the technologies involved. Further development has to be made for data interactive tools to become easier to use and to produce large-scale interactive web applications involving data display and analysis. The advancement of interactive visualizations are also relevant as studies have shown that engaging lectures lead to a statistically significant higher average on unit exams compared with traditional didactic lectures. This could be hypothesized to be the same for interactive data and this was confirmed by a small questionnaire.