An internship in the UK: An opportunity or a form of exploitation? : Student and graduate internships in the United Kingdom 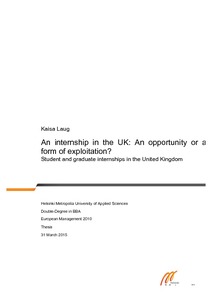 Every year, there are millions of graduates leaving British higher education (HE) institutions and entering the highly competitive world of work. The competition-fuelled pressure to secure employment drives young scholars to desperation, meaning that they are willing to work for nothing to gain work experience, which gives employers the power to exploit the cost-effective intern army. So why is it suddenly reasonable to use young educated labour and pay them nothing? Why does one have to work for no pay in hope of making himself employable?
The purpose of this paper is to explore the question; is an internship an opportunity or a form of exploitation? Based on my observations during an internship at a British intern recruitment business, I found that there is an alarming number of businesses utilising the opportunity to employ cost-effective intern labour. Yet, there are exceptions suggesting that an internship can also be an invaluable opportunity. The competition for work is increasingly high and internships are therefore a long-awaited solution to fill the skills gap between academia and employment. Training is also an important investment into human capital (Becker, 1964), and thereby helps to increase the future earnings (Mincer, 1974). According to Spence’s signalling theory (1973) it gives credible signals of certain ability and is used as a ‘screening device’ indicating a greater ability, according to the screening theory (Stiglitz, 1975). However, unpaid internships have become the new entry-level positions restricting the access to certain industries for the students and graduates with the least financial resources. Such discrimination is also fuelling the inequality in British society. However, internships can be mutually beneficial, yet only if conducted ethically. There is a need for the British government to design a screening mechanism to proactively monitor any provision of internship opportunities and increase the transparency in this subject. Also, it is important to increase the awareness of both interns and businesses to enforce the National Minimum Wage (NMW) Act 1998 and for them to know their legal obligations and entitlements.