Examining the limits of Moore’s law : possible influence of technological convergence on redefining the curriculum in ICT institutions 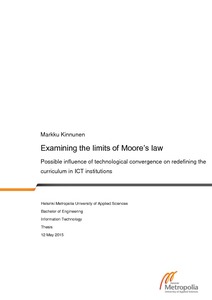 Moore's law of exponential growth predicted the doubling of processor speed per unit of area on silicon microchips with a doubling period of 18 months. This has continued to be the case ever since Gordon Moore first postulated this notion in a publication in 1965. Some researchers have estimated Moore's law will reach its physical limits within the next 15-20 years. Notably, the rate of growth has already slowly begun its decay over the past decade and viable alternatives that provide equal to or superior processing speeds for computations are already in research and development stages.

The aim of the project was to determine whether or not the emergence of the nanotechnology and microelectronics industries could end up re-defining the next era in information and communication technology (ICT) as Moore's law approaches the end of its growth doubling pattern. Through a review of literature, articles were analyzed thematically as the research aimed to identify possible trends in microelectronics relating to various restrictions from Moore's law continuing indefinitely. The results of this report found that technological convergence is a future event. However, institutions have an opportunity to be leaders of change as the next big technological changes unfold. Recommendations were presented to help Helsinki Metropolia University of Applied Sciences tailor their future curriculum in the IT degree programme to future student groups in accordance with a potential merger of technology industries.