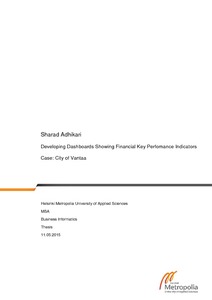 The main objective of this thesis was to develop a dashboard that would show the key financial performance indicators (KPIs) at City of Vantaa. City of Vantaa is the fourth biggest city in Finland. Though Vantaa had an enterprise resource planning system and several other sources of financial data, it was missing a data visualization tool. The reports were mostly in tabular format and they had hardly any data visualisation appeal. The idea of this thesis was to gather financial metrics from each functional department as well as city level. Also a dashboard would be designed to show these financial KPIs using best practices.

This thesis used the action research method. The action research model of Denscombe (1998) was applied to undertake the research. The need of developing the dashboard was highlighted on a survey result among the end users at City of Vantaa. It was quite clear that the end users wanted to have visualized reports and not just tabular reports. Further, five interviewees were selected from each functional department. Financial director was also interviewed to gather key performance indicators at city level.

Once the interview data was collected, it was analysed to explore the financial key performance indicators on department as well as city level. Once all metrics were mapped out, it was felt that the need of developing the dashboard was more important at city level. So KPIs at city level were prioritized to show in the dashboard. It was decided to choose 8 financial KPIs showing operating, investment and financial key performance indicators. Once designed, the draft version of the developed dashboard was presented to the financial director as well as the budget manager at City of Vantaa. The final dashboard was refined and personalized according to mandate of the financial director. It was also decided to publish the dashboard to the public and update the data manually until similar dashboard is developed in Knowledge management project. It was found that financial data are available in System Applications and Products in Data Processing (SAP) but will need an extract, transform and load (ETL) or third party tool to extract data in structured format. Additionally, a reporting tool like Tableau can be used to create a fully functional dashboard of professional standards.

The author recommends to use the developed dashboard as a model to develop similar dashboards in Knowledge Management project. It is also recommended that Vantaa ensures commitment from senior level managers to use dashboards to follow financial KPIs and make better decisions.