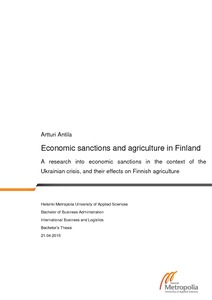 The purpose of this research is to observe economic sanctions and their usefulness in modern international politics. Additionally, the effects of economic sanctions imposed by both the Western world and Russia against each other in 2014 will be discussed. Furthermore their impact on the European agriculture will be examined with the focus on the Finnish agricultural sector.

Economic sanctions have been imposed on countless occasions over the course of years and their effectiveness has been questionable at best. Generally, there are primary goals and secondary goals for the sender countries or organizations when imposing of sanctions is considered. More often than not, it seems that the primary goals are rarely reached. However, other goals are usually reached through sanctions, even if they are not always the intended ones. Sometimes economic sanctions might even be used for domestic purposes rather than affecting the target country.

The sanctions imposed by both the Western world and Russia seem to have both positive and negative effects on both sides. The inter-connectivity and global nature of the modern markets causes the economic sanctions imposed in 2014 to impair both the east and the west.

The Finnish agricultural sector, alongside the European agricultural sector, has been struggling because of the Russian sanctions targeting the groceries from the European Union. Negative effects of the sanctions can be seen in the market as prices of agricultural products are falling and possible wave of unemployment is looming over the agricultural industry. A secondary plan of action should be devised, such as searching for alternate markets, so that if the industry faces similar difficulties in the future, the negative effects can be nullified, at least to some extent.