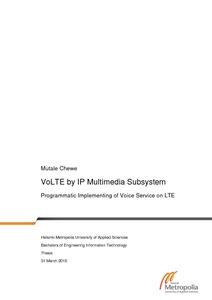 A test-driven approach for rapidly deploying Voice over LTE (VoLTE) would prove essential, considering the revenues being lost to Internet protocol (IP) based solutions such as Voice over IP (VoIP). Subsequently voice development for LTE networks is indispensable considering that VoIP has no Quality of Service (QoS) guarantee, which consequently renders it unreliable. The thesis project aimed at analysing and describing the implementation of VoLTE from a programmatic perspective, focusing on end-to-end validation of a basic VoLTE configuration by using industrial test tools to validate functional and logical entities requisite in achieving a cumulative delay of less than 200 ms, widely held and shown to be the minimum acceptable latency for a practically deployable VoLTE system.