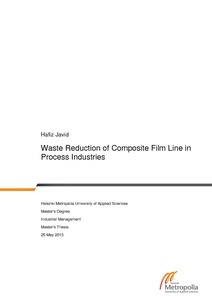 This study is conducted as a case study, divided into theoretical and empirical parts. Theoretical part begins with the overview of lean manufacturing techniques and then discusses other approached and tools to reduce waste and increase the overall operating efficiency of the production film line. Just-In-Time tool was used to control the inventory, developed the good relationship between suppliers and consumers, improve quality of the product by supplying the short lot sizes of the raw material. Lean 5 S’s tool is used to eliminate waste in the production area of film line. In order to reduce the breaks during the manufacturing of film, SMED technique is considered. Finally, scheduling of the preventive maintenance rather than corrective maintenance is proposed to make manufacturing in the film composite line more cost effective and result oriented.

In the empirical part, semi-structured interviews were conducted with the stakeholders of the case the company. Seven interviews were conducted with the production engineers and quality assurance workforce to collect data in three different rounds. The preliminary proposal was built with the collaboration from the stakeholders and incorporated also the findings from the theoretical part. Later, the final proposal was developed in four sections and focused on quality improvement, small breaks reduction, scheduling of maintenance, and introducing the Lean 5S's tools.

The final proposal then presented to the higher management to discuss and put it into implementation. The outcome of the thesis is to reduce waste during the manufacturing of the product, in order to increase the profitability through the application of preventive maintenance and some lean tools and techniques.