Towards Gender Equality : A case study of Finland 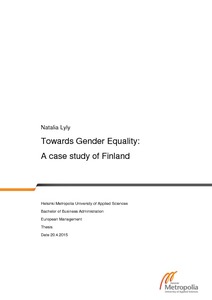 The purpose of this thesis was to evaluate the state of gender equality in Finland and find out what kind of measures could be used to improve it and how different approaches fit the Finnish culture. The study focused on positions of economic decision making, using these positions as basis for measuring equality and the success of measures used.

The study was conducted by analysing existing research and reports on gender equality. In addition to reviewing relevant research, comparative analysis was conducted and quantitative data over time and between different markets was analysed. By doing comparative and qualitative review, a comprehensive picture of the current situation was created.

The results revealed that gender discrimination in Finnish labour market is mainly a result of prejudices and biased judgement of character, originating from gender stereotypes and remains of old tradition and cultural norms. Discrimination is often indirect and unintentional, which means direct discrimination in the labour market, such different pay for the same work, is rare. The research indicates that the most effective measures already in place are based on voluntary means of promotion, such as corporate governance codes and target recommendations. These measures seem to fit the Finnish market environment better than compulsory measures. However, the research also shows that these measures are not enough. In addition, reforming the policies which create social equality between the sexes needs to be considered, in order to create flexibility and divide the burden of for example parenthood between the parents. Considering future development, raising awareness and creating new norms and attitudes is the biggest challenge.