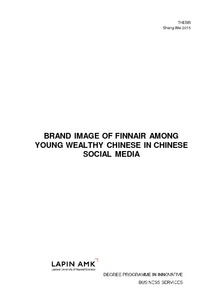 The data of this survey in this thesis was collected in April 2015, and100 respondents provided their answers. The survey was only published on the Chinese social media, Weibo and Wechat. From the results of the survey, some suggestions are made that how to promote brand image of Finnair among young wealthy Chinese people via using Chinese social media. From this thesis, the author hope that not only Finnair but also other foreign companies which want to expand their market in China would get some useful information. If a foreign company wants to develop their brand image in China, Chinese social media marketing could be one of the most innovative and effective methods. In addition, Finnair has already had an official account in Weibo. However, this official account is not used frequently. Finnair could develop their social media marketing in the future.