Design and Implementation of a Virtualized Home Network Education Environment 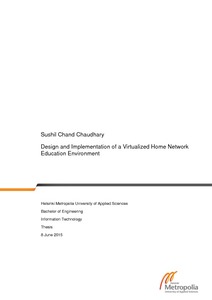 This project aimed to present and implement the virtual technology that would allow a me-dia engineering student to access the individual PCs in the virtual environment to perform their lab exercises. The project was planned to be done in two parts.

The working of the project in the first part was to create and test the virtual network in a small scale environment. A simple virtual network was created and tested with the help of a single virtual router, virtual switches and two virtual computers as hosts in VMware Workstation 10. The second part was focused on implementing and scaling the virtual network in large number using VMware vSphere Hypervisor (ESXi). In this part, virtual network was created on a large scale with multiple switches and a router and installed in the server environment. The project was scaled and implemented to support a maximum number of students at the same time. The router and switches erased previous configura-tion automatically. This part was also focused for students to gain access to individual PCs in the virtual environment in a convenient way.

Successful design and implementation of the project eased the media engineering students to perform their lab exercises. This project was designed for basic networking lab exercises; therefore the student cannot work for advanced networking exercises in this virtual network environment.