Conversion Of An Ordinary Car To Fuel-cell Vehicle 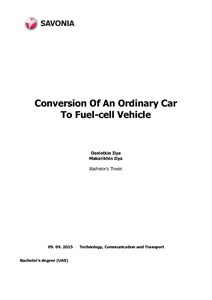 Nowadays, increasing levels of carbon dioxide and the fading oil reserves prompt to the idea of
green energy based on sustainable development.
It was decided to solve the problem of the mass of carbon dioxide emissions into the atmosphere
by taking a basic environment: everyday life.
Now, cars are not a luxury, but means of transportation, many emit combustion products.
The thesis was aimed at finding ways of optimal solutions to this problem. Many years ago there
were some ideas, which were embodied in life (such as an electric car factory on the Volga from
1970-1980, and the range of Tesla Motors), as part of the development which have been delayed
or even shut down for various reasons.
In a succinct work, lithium-ion batteries, hydrogen instead natural gas and gasoline were used.
Based on fuel, there was a target to make this idea not only clean and legal, but attractive and
pleasure to people`s eye.
The development of various companies is used in this project, such as Russian, Japanese and
Western partners. The use of fuel cells, solar cells, electric motor and powerful security - allow you
to use the suggested idea on any car. It also solves the problem of consumer demand. Everybody
prefers different things: beautiful design parts of BMW, Futurism Toyota and Rolls-Royce. Decision
was made based on personal view and each could choose his style of car.