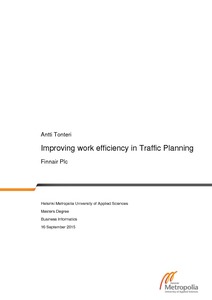 The purpose of the present thesis was to find out the most important improvement areas in the work of Traffic Planning team, which is part of Resource Management department at Finnair Plc. Finnair is a Finnish commercial airline focusing on the traffic between Europe and Asia. The team members have reported dissatisfaction about the working environment especially during the last two years. The objective of this this study was to identify the main problem areas and find solution(s) to improve the working environment and the efficiency of the whole team.

The study was carried out by using qualitative methodology. The Head of Traffic Planning was interviewed and various figures and tables describing work processes of the Traffic Planning team were studied. Two members of the team were also interviewed in order to find out whether the findings and recommendations were in line with their opinions.

A key finding in the study was that the communication within the team and with the main stakeholders was not a sufficient level. The decision-making process was leaning too heavily on the team leader and the level of empathy and respectfulness required improvements. Honesty and openness were also issues that needed to be improved.

The author recommends improvements in three areas. First of all, the level of trust needs to be increased for all the team members as well as towards the main internal stakeholders. Secondly, empathy and respectfulness should be valued better in the team’s everyday work. Additionally, empathy and adding respect to the co-operation with the stakeholders is very important. Finally, honesty and openness inside the team as well as towards the key stakeholders should be paid more attention to.