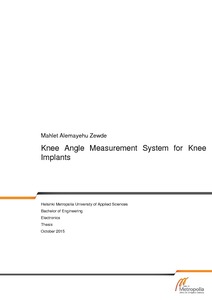 The goal of this thesis project is building a knee angle measurement system for knee implants. Measuring the knee angle can be the new postoperative diagnosis method which assists in early diagnosis of total knee implants (TKAs).

This system is used to acquire magnetic field data from magneto sensors and process it using a microcontroller. Then, this data is transmitted wirelessly in to a receiver system (data logger) which logs the received data into a computer or USB.

The work was carried out in two phases. First, the work of previous students was modified and optimized. After this the analog magneto sensors were replaced with digital sensors, and the analog frontend ADS1296 (AFE) was omitted, resulting in a smaller and cheaper PCB.

Finally, it was possible to develop a system which can measure the magnetic field variation, which is dependent on the position of magnet and transmit it wirelessly via a wireless transmitter.

Further work can be done to modify this project by processing the sensor data acquired and associate it with the exact location of the magnet. Another possibility of further work is modifying the PCB further by using a microcontroller with an embedded wireless module such as CC430 by Texas Instruments.