Data Management in an Elastic Storage Environment : Backup and Archive 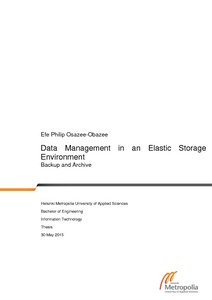 This project aimed to implement a storage solution with a backup and archiving functionality in a scalable environment. An educational institution was used, processing large amount of data of both staff and student as a use case scenario. The project showed how a scalable storage system can be setup and used to meet the needs of the institution.

The result of this project was an elastic storage environment with a backup and archiving functionality. In the test, the backup functionality provided by IBM Spectrum Protect allowed a policy-based controlled backup and the IBM Spectrum Archive made it easy to migrate data from disk to tape with no additional software. This makes it easy to store data in a less expensive way. With IBM Spectrum Scale included in the setup, the system has possibility to add/remove client node without affecting the overall setup.

The project was a success and all the goals were achieved.