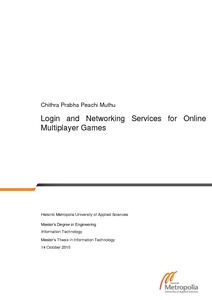 In the research the advantage of various login and networking methods in Azure Platform, Photon Platform and the SIP protocol of IMS framework were experimented and compared. The results of the study include the implementations of login services for the game understudy and suggestions on the benefits of using IMS for multiplayer games. The discussion with the game team understudy led to better understanding of the architecture of the game, advantage and disadvantage of using the different methods of login services and in future how the game could be benefit from using IMS as well, along with other platforms, and be able to involve more users in their game. The outcome of the thesis also includes prototyping of functionalities such as authentication and secure data storage, SIP server and client setup.