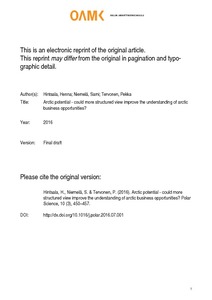 The increasing interest towards the Arctic has been witnessed during the past decades. However, the commonly shared definitions of the Arctic key concepts have not yet penetrated national and international arenas for political and economic decision making. The lack of jointly defined framework has made different analyses related to the Arctic quite limited considering the magnitude of economic potential embedded in Arctic. This paper is built on the key findings of two separate, yet connected projects carried out in the Oulu region, Finland. In this paper's approach, the Arctic context has been defined as a composition of three overlapping layers. The first layer is the phenomenological approach to define the Arctic region. The second layer is the strategy-level analysis to define different Arctic paths as well as a national level description of a roadmap to Arctic specialization. The third layer is the operationalization of the first two layers to define the Arctic business context and business opportunities. The studied case from Oulu region indicates that alternative futures for the Arctic competences and business activities are in resemblance with only two of the four identified strategic pathways. Introduction of other pathways to regional level actors as credible and attractive options would require additional, systematic efforts.