Melanisation of Aspergillus terreus : Is Butyrolactone I Involved in the Regulation of Both DOPA and DHN Types of Pigments in Submerged Culture? 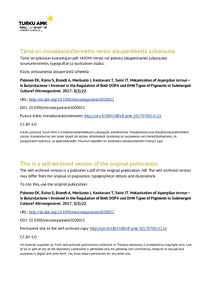 Pigments and melanins of fungal spores have been investigated for decades, revealing important roles in the survival of the fungus in hostile environments. The key genes and the encoded enzymes for pigment and melanin biosynthesis have recently been found in Ascomycota, including Aspergillus spp. In Aspergillus terreus, the pigmentation has remained mysterious with only one class of melanin biogenesis being found. In this study, we examined an intriguing, partially annotated gene cluster of A. terreus strain NIH2624, utilizing previously sequenced transcriptome and improved gene expression data of strain MUCL 38669, under the influence of a suggested quorum sensing inducing metabolite, butyrolactone I. The core polyketide synthase (PKS) gene of the cluster was predicted to be significantly longer on the basis of the obtained transcriptional data, and the surrounding cluster was positively regulated by butyrolactone I at the late growth phase of submerged culture, presumably during sporulation. Phylogenetic analysis of the extended PKS revealed remarkable similarity with a group of known pigments of Fusarium spp., indicating a similar function for this PKS. We present a hypothesis of this PKS cluster to biosynthesise a 1,8-dihydroxynaphthalene (DHN)-type of pigment during sporulation with the influence of butyrolactone I under submerged culture.