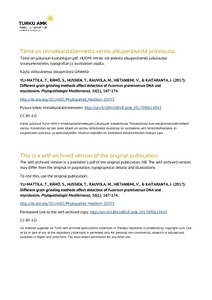 Fusarium graminearum is the most important deoxynivalenol (DON) producing species in northern Europe and Asia. The highest DON levels in Finland have been found in oat grain, and DNA levels of F. graminearum are in agreement with DON levels, when DON is measured by accredited GC-MS. In addition to DON, 3ADON is present in Finnish grain samples. Large variations in DON content and amounts of F. graminearum DNA, and poor coefficient of determination (R2) between these, have been detected in oat grain when the RIDA®QUICK SCAN kit results for DON content have been used. This study confirmed that the coefficient of determination was usually less when DNA or DON were extracted from oat flour, which was not ground with 0.8 mm or 1 mm sieves. DON levels obtained with the Rida®Quick method were usually higher than those obtained with accredited GC-MS in Finnish oat, barley and wheat samples. The homogenization of the oat flour by sieving is therefore likely to be connected to the variations in DON detection. Amounts of F. graminearum DNA and DON close to legislative limits should be reconfirmed with accredited quantitative analyses.