Testing the wisdom of crowds in students' group work 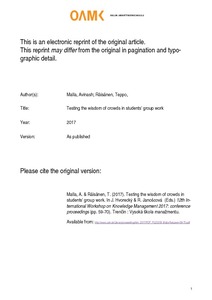 In his book, “The Wisdom of Crowds”, James Surowiecki argues that a group becomes “smart” and makes better decision than an individual if the group satisfies the four conditions-diversity of opinion, independence, decentralization and aggregation. This paper intends to investigate whether groups that have higher diversity of opinion, independence, decentralization and aggregation perform better than the groups that don't. Ideally, the groups should perform better when they satisfy the four conditions better. One set of groups followed The Wisdom of Crowds hypothesis while another set of groups, working on a different task, did not. Both sets of groups, however, performed better when they had higher diversity of opinion.