Impact of intellectual capital on the performance of the Finnish publicly listed companies. 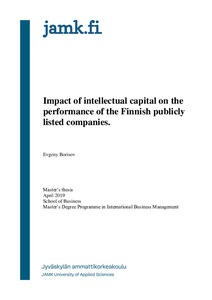 Borisov, Evgeny
All rights reserved. This publication is copyrighted. You may download, display and print it for Your own personal use. Commercial use is prohibited.
Näytä kaikki kuvailutiedot
Julkaisun pysyvä osoite on
https://urn.fi/URN:NBN:fi:amk-201905098532

Traditionally, researchers and economists have identified two types of resources that facilitate the productivity and economic activity of companies. These resources are physical and human capital. However, knowledge has been recently recognized as a valuable resource as well. All the concepts related to knowledge and the knowing capabilities of organizations and companies have been named as “intellectual capital” (hereafter IC).
The objective of the research was to examine whether there was any significant relationship between IC and Finnish companies’ performance. Corporations were selected from the Nasdaq OMX Helsinki, and the companies’ sector was Information Technology (hereafter IT) and Telecommunications. There were two IC measurement methods selected: the Economic Value Added (hereafter EVA), and the Value Added Intellectual Coefficient (hereafter VAIC). As for the company performance, it was measured with the help of three financial indicators, such as Return on Assets (hereafter ROA), Return on Equity (hereafter ROE), Earning per Share (hereafter EPS), and two market indicators, such as Market Capitalization (hereafter MCap), and the Market-Book ratio (hereafter MB).
The study applied quantitative research methods. Financial data was collected for a period of 5 years, 2013-2017. The key source of information was the companies’ financial statements and the Nasdaq OMX Helsinki web page. The analysis of the data included three major parts: descriptive analysis, correlation analysis, and regression analysis.
The findings of the study showed that there was no significant relationship between IC and company performance for the studied period. The Human Capital Efficiency (part of the VAIC method) was the only one having a strong influence on the market performance. Moreover, the influence of the EVA was negligible. The research, however, did not study the reasons why a significant relationship was missing. Thus, it was difficult to understand whether IC exceptionally did not have a strong relationship with the company performance. On the other hand, it could be IC is weakly present in the Finnish IT and Telecommunication sector.