A taste for aliens : contribution of a novel prey item to native fishes’ diet 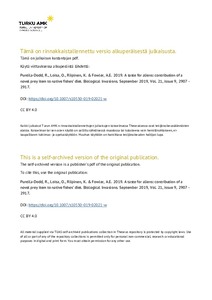 Non-indigenous species (NIS) can alter food web structure and function in many ways. While the predatory and competitive roles of NIS in aquatic environments are commonly studied, their role as a prey item for native predators is often overlooked. As the northern Baltic Sea lacks native crabs, the omnivorous estuarine Harris mud crab (Rhithropanopeus harrisii) is a novel invader to the system and provides an opportunity to observe how the species enters the prey field of predatory fish. In fall 2013, 1185 stomachs from 17 fish species were dissected and analyzed for the presence of R. harrisii. Fishermen had previously reported finding crabs mostly in the stomachs of perch (Perca fluviatilis), a frequent catch in recreational and commercial fisheries, but our study also found large numbers of crabs in four-horned sculpins (Myoxocephalus quadricornis) and small numbers in other species’ stomachs (Rutilus rutilus, Leuciscus ide, Gymnocephalus cernuus, and Blicca bjoerkna). In the study area occupied by R. harrisii, four-horned sculpins were the most frequent predator, with 83% having at least one crab in their stomach. In comparison, 7% of perch and roach had consumed R. harrisii. Most crabs eaten were 10–12 mm (carapace width), despite broader size range available (1–26 mm). Predation on R. harrisii in this system may be limited by the predators’ gape size (i.e., physical feeding restriction). These results highlight the need to understand the role of novel invasive species as prey items for native species, ultimately increase understanding of whether native predators can control NIS populations.