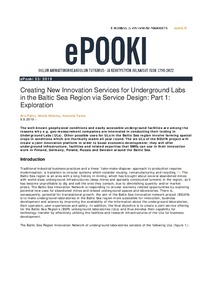 The Baltic Sea Innovation Network is developing the Baltic Sea region by finding new uses for underground spaces. This involves creating an innovation platform based on the facilities and research equipment in the Underground Labs (ULs) of relevant universities and research institutes in the region. Service design was used in the process of developing a joint service offering, as its visual tools and customer orientation are believed to benefit such industrial service development. Besides customer orientation, service design emphasises the importance of the lucrativeness of the services being developed. This is of interest to the owners of the ULs, as maintaining such spaces requires both expertise and funding. The present paper focuses on the exploration phase, during which the currents business models of the ULs were described and analysed in order to identify their critical aspects, which require special attention in the creation phase of the new services.