The effects of moving into an activity-based office on communication, social relations and work demands : a controlled intervention with repeated follow-up 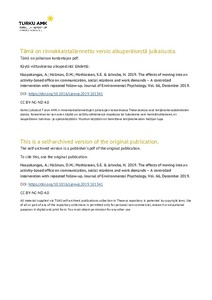 When organizations adopt activity-based workplaces (ABWs), improved interaction is a common goal. Yet, few controlled longitudinal studies have been conducted on the effects of ABWs on interaction, social relations and work demands. The aim of this natural intervention study was to investigate the effects of moving into an ABW on satisfaction with communication, on social relations (i.e., social support and social community) and on work demands (i.e., quantitative demands, emotional demands and work pace) 3 months and 12 months after the relocation. The study included four offices which relocated into an ABW and one control office that did not. Questionnaire data from 408 respondents were analyzed with linear mixed models. Satisfaction with communication and the sense of belonging to a community had decreased 3 and 12 months after the relocation. Work pace was not affected while small, mostly short-term, negative effects on social support, quantitative demands and emotional demands were only observed among employees who had moved to ABWs from private offices. Differences between office sites were also observed. The results suggest that, to avoid negative outcomes, organizations moving to ABWs should focus on solving difficulties in locating colleagues at the office and on supporting particularly workers from private offices in adopting activity-based working.