femaleForum : competence for the future 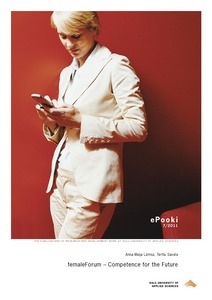 The first femaleMBA (fMBA) programme in Oulu University of Applied Sciences was carried out in 2005-2008. The fMBA was a high-level academic, research and development project for women entrepreneurs and women in management and leadership positions in organisations. This article presents the key results of a study which aimed to investigate the role of the fMBA programme to the career progress as well as the development of leadership and management competences for women who completed the programme. Based on this study, it can be concluded that fMBA programme provides participants with positive career transitions. The majority of the respondents indicated that they had subsequently experienced a career transition. The fMBA graduates also perceived that their management competences had improved to a significantly larger extent than what they had originally expected. The present study also suggests that a diverse group of women is a richer social and psychological recourse than a group where participants represent a single industry or organisation. This study also produced theoretical knowledge by creating a new conceptual model of management competences.