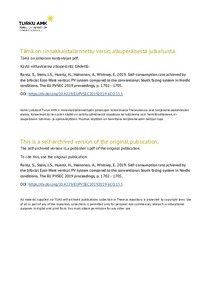 
Ranta, Samuli
Stein, Joshua S.
Huerta, Hugo
Heinonen, Aleksi
Whitney, Erin
EU PVSEC
All rights reserved. This publication is copyrighted. You may download, display and print it for Your own personal use. Commercial use is prohibited.
doi:10.4229/EUPVSEC20192019-6CO.15.5
Näytä kaikki kuvailutiedot
Julkaisun pysyvä osoite on
http://urn.fi/URN:NBN:fi-fe2020040710690

This paper presents a comparison between bifacial east-west vertical (EWV) and conventional south facing monofacial PV system in Nordic conditions. Special attention is given to the self-consumption rate reached at each system when residential loads are considered. Two test systems with bifacial EWV solar modules were installed, one on the rooftop of the premises at Turku University of Applied Sciences (TUAS) in Finland and another bifacial and monofacial system in Fairbanks, Alaska at the campus of the University of Alaska. System performance was monitored and recorded once per minute for post analysis. The real residential PV system at near proximity to the Turku test site was selected as a reference. The performance of the systems was monitored for a full calendar year in Finland and for two months in Alaska. This yield data is compared to the real-world residential load data collected earlier from the Turku region. As a result, the self-consumption rate of the systems can be calculated.