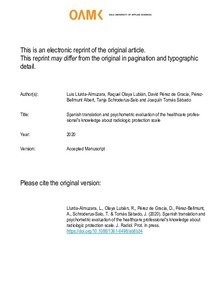 PURPOSE: To make an intercultural adaptation, and to provide a Spanish translation and psychometric evaluation of the original English version of the Healthcare Professionals Knowledge about Radiation Protection scale. METHODS: The Spanish translation was carried out following international Guidelines for the process of cross-cultural adaptation of self-report measures. A cross-sectional design study was carried out. A hundred and thirty-eight nurses from 4 different hospitals in Barcelona (Spain) completed the Spanish version of the scale. Total score of the scale was calculated. The Pearson correlation coefficient (PCC) was used to evaluate a possible correlation between score and years of experience. A T-test for independent samples was used to evaluate significant differences between different groups. Cronbach's alpha and corrected item-total correlation coefficient and test-retest coefficient were used to determine internal consistency. The exploratory factor and parallel analysis was also calculated. All statistical tests were carried out with a level of significance α=0.05. RESULTS: The mean scale score was poor among Spanish nurses. The PCC between total score and years of experience showed a non-significant correlation (p>0.05). No differences were found between nurses who work in radiation exposed units and those who work in radiation unexposed units (p>0.05). A Cronbach α of 0.98 was obtained for the items of the scale. The corrected item-total correlation range was 0.5-0.8. The test-retest correlation coefficient was 0.9. The exploratory analysis factor showed a single factorial structure which explained a 60.86% of the variance. CONCLUSIONS: The new scale translated into Spanish (Sp- HPKRP) could be used to evaluate the degree of knowledge about radiological protection.