The importance of and satisfaction with sex life among breast cancer survivors in comparison with healthy female controls and women with mental depression or arterial hypertension : results from the Finnish nationwide HeSSup cohort study 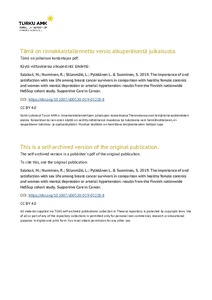 Introduction Breast cancer (BC) and its treatment is associated with several physical and psychosocial changes that may influence sexuality for years after treatment. Women with BC show significantly greater rates of sexual dysfunction than do healthy women. The purpose of the study was to evaluate how a BC diagnosis associates with women’s perceived sexuality and sexual satisfaction.
Material and methods The data of the ongoing prospective Health and Social Support (HeSSup) survey was linked with national health registries. Respondents with registry data confirmed BC (n = 66), mental depression (n = 612), arterial hypertension (n = 873), and healthy women (n = 9731) formed the study population. The importance of and satisfaction with sex life were measured by a self-report questionnaire modified from the Schover’s and colleagues’ Sexual History Form.
Results Women with BC considered sex life less important than did healthy women (p < 0.001). They were significantly less satisfied with their sex life than healthy women (p = 0.01) and women with arterial hypertension (p = 0.04). Living single or educational level did not explain the differences between the groups.
Conclusions BC survivors depreciate their sex life and experience dissatisfaction with it. Sexuality can be a critical issue for the quality of life of women surviving from BC, and hence, the area deserves major attention in BC survivorship care. Health care professionals should regularly include sexual functions in the assessment of BC survivors’ wellbeing.