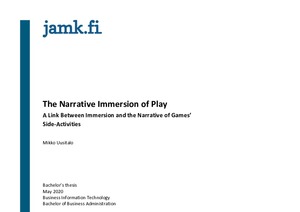 The thesis aimed to research the connection between narrative immersion and the willingness of video game players to perform side activities while playing. There are many existing researches done on the connection between immersion and narrative, but not enough that focus on the side activities of games. The study was assigned by JAMK’s Business Information Technology degree programme.
In the first part the history and theories regarding both narrative and immersion are looked at from the perspective of ludology. The relationship between narrative and ludology was found to be rather short yet controversial. Immersion on the other hand was found to go well with video games and different elements that causes it were discovered.
In the second part a qualitative study was conducted using two different narrative-heavy video games. A total of seven participants were interviewed on their experi-ences and thoughts on these titles. The participants were adults or young adults who agreed to be interviewed in an online environment. These interviews were then ana-lysed on compared with pre-existing information on the topic.
The study found out that many elements affect the immersion and enjoyment of the game according to the participants. The two most important elements for immersive side activities from the perspective of the narrative turned out to be curiosity and context. The players needed to feel a logical connection between the world of the game and their actions while the game needed to keep the players invested by offer-ing interesting situations where the players wanted to experience more.