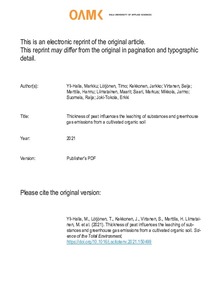 The off-site effects of agricultural organic soils include the leaching of N, P, and organic carbon (OC) to watercourses and CO2, CH4, and N2O emissions into the atmosphere. The aim of this study was to quantify how the thickness of organic layers affects these loads. A 19.56-ha experimental field drained by subsurface pipes was established in Ruukki, northwestern Finland. Three plots had a 60–80 cm-thick sedge peat layer and three others had a thickness of 20 cm or less. The drainage pipes lie in mineral soil that, in this field, contains sulfidic material. This study documents the experimental settings and reports on the leaching of substances in the first two years, as well as CO2, CH4 and N2O emissions during eight weeks in one summer. Total N (TN) and OC loads were higher from the thicker peat plots. The mean TN loads during a hydrological year were 15.4 and 9.2 kg ha−1 from the thicker and thinner peat plots, respectively, with organic N representing 36% of TN load. Total P (TP) load averaged 0.27 kg ha−1 yr−1. Dissolved P load represented 63 and 36% of TP in the thicker peat area and only 23 and 13% in the thinner peat area, and was thus increased upon peat thickness. These N and P loads through the subsurface drainage system represented roughly 83% of TN and 64% of TP loads from this field. There were no clear differences in greenhouse gas emissions among the plots during the eight-week monitoring period. Slowly oxidizing sulfide in the subsoil resulted in annual leaching of 147 kg S ha−1, almost ten times that of non-sulfidic soils. Our first results emphasize the effect of the peat thickness on the leaching of substances and warn about considering all organic soils as a single group in environmental assessments.