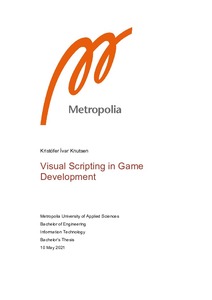 Knutsen, Kristófer Ívar
All rights reserved. This publication is copyrighted. You may download, display and print it for Your own personal use. Commercial use is prohibited.
Näytä kaikki kuvailutiedot
Julkaisun pysyvä osoite on
https://urn.fi/URN:NBN:fi:amk-2021052812313

This thesis explores how visual scripting is used in game development, both in practice and in theory. The topic starts on a broad level but is narrowed down to the two most popular game engines to date, the Unreal Engine and the Unity Engine. Next, the theoretical part covers how the selected game engines have evolved from their infancy and when visual scripting became a part of their respective platform. Finally, the visual scripting tools were used to create mini-games in each engine, and the process was compared and analyzed in the practical part.

The hypothesis that visual scripting is inferior to traditional written code was tested by research and in practice. The main emphasis was to look at the visual scripting offerings for the Unreal Engine and the Unity Engine, compare them to their scripting language counterpart and then compare them against each other.

The results of both the theoretical and the practical part show that the visual scripting tools are an excellent asset for anyone who wants to use their many benefits, such as quick iteration, fast prototyping, and increased productivity between programmers and designers. However, it also demonstrates some aspects of the game development process that should be taken into consideration while using visual scripting due to some limitations that the tool can show.